Breathing is so fundamental to stay alive that many cultures associate the act of gas exchange to actually having a living soul. The lungs are the main organs of breathing in humans and mammals, and they play an important role in the equilibrium of our metabolism.

Without oxygen we could not live. Our cells need oxygen to convert glucose into energy molecules called ATP. With ATP, cells create new things, move around, and complete their functions faster. You could say that oxygen is fundamental to recharge the batteries, and without oxygen cells would not function and end up dying. That’s why the breathing process does not depend on our command. The body is making sure that we’re not in danger just because we forgot about breathing for a while.

In this article, we’re exploring some early concepts about lung physiology. We’re telling you a bit of what happens inside the body with oxygen. Then, we’re walking you through the process of breathing, and numbering the different volumes of air we always have in our lungs.

Why are The Lungs So Important?

As noted in the introduction, each cell of the body needs oxygen to remain healthy and keep on living. Besides taking oxygen, our body has to get rid of carbon dioxide gas. Carbon dioxide is a waste gas in our body that originates from our cell’s daily activities and functioning. When we breathe in and out, our lungs exchange oxygen and carbon dioxide gases.

This is not only important to create ATP. Breathing is also a critical function to maintain our pH levels. pH is a measure of how many free hydrogen molecules are there in the environment. An acidic pH means that you have many hydrogens and hydrogen donor molecules. An alkaline pH means that you don’t have many hydrogens around and the substances are mainly oxygen receptors. Oxygen acts as an alkaline substance while carbon dioxide acts as an acidic substance. When you breathe, you’re also neutralizing the acid in your blood.

But remember that too much of a good thing is not always a good thing. When you breathe rapidly for a very prolonged period, say 4 or 5 hours, there’s a risk of turning your pH alkaline, which is also very bad. This typically happens to some patients who hyperventilate in the emergency room, especially those severely ill, and it is known as respiratory alkalosis.

The lungs work like a pair of bellows. They take oxygen into the body as they stretch. They remove carbon dioxide as they contract. However, the lungs don’t have muscles to pump oxygen in and out. Instead, they are pumped by the diaphragm and rib cage in the respiratory mechanism. Bellows do not activate themselves. You need to activate them using the handles and your own force. Similarly, the lungs are inert by themselves and stretch thanks to respiratory muscles all over the chest.

A word about Lung Physiology

The primary function of the lungs is to exchange gases. These gases are carbon dioxide and oxygen. The lungs are then responsible for oxygenating our blood through the respiratory mechanism. This respiratory process takes place in two phases, known as inhalation and exhalation.

The lungs have a peculiar way of safeguarding themselves. The bronchial tubes are lined with cilia, which appear like a layer of very tiny hairs. These cilia produce mucus to trap and move microorganisms out of the airway. The second defense mechanism of the lungs is the alveolar macrophages. These are white blood cells on the alveoli’s surface, and they kill and digest foreign particles like dust.

Similar to a bottle that you can fill with water up to a point, the lungs also have a limited capacity to hold air. The maximum capacity of air that your lungs can hold is known as total pulmonary capacity, and it is around 5,900 mL of air. Surely, this measure depends on your age, sex, and size.

This doesn’t mean that you fill your lungs with almost 6,000 mL of air every time you breathe. Actually, you use less than 10% of your lung capacity for each breath you take. Here’s a list of the most important pulmonary volumes:

You might wonder why are all of these facts important for you. If you’re breathing normally, you won’t probably bother much about volumes, capacity, lung lobes, or respiratory function. But each one of these physiologic measures are important to diagnose a pulmonary condition. They are often affected in patients with diseases such as lung cancer, chronic obstructive pulmonary disease, pneumonia, asthma, or pulmonary fibrosis. That is why it is so important for doctors to know about physiology, and for patients to understand a doctor’s jargon and what is happening inside of their bodies. 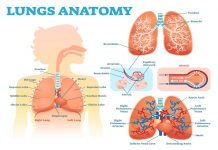