The lungs are in contact with a very high volume of blood for every minute. As such, it is one of the most susceptible organs for metastasis. Cancer in the lungs is also very likely to spread, making lung cancer a particularly dangerous disease. Some cases are detected before spreading happens, while others have very accelerated growth and are only diagnosed when it is too late to take the primary tumor out.

Just like any other cancer, lung cancer starts as a bunch of cells that divide very rapidly. A tumor begins to grow from these cells, only limited to one area. As the cells divide more, they start undergoing mutations, making cancer more aggressive. In time, the tumor is not limited to a small area of the lung. It spreads locally, and the cells start traveling to distant locations.

Each of these steps in the process is described by cancer stages or grades. For therapeutics, it is imperative to know in which stage cancer is before planning what to do about it, and in this article, we will review how doctors stage lung cancer and what tools do they use.

We have 5 stages of non-small cell lung cancer. They are as follows:

Staging is done by analyzing the results of different imaging tests and biopsies. The most common tests to stage lung cancer include:

Prognosis according To The Stage

In non-small-cell lung cancer, the prognosis is more favorable. Patients in stage I have a 70% survival rate in 5 years. As the number of the stage increases, the survival rate is reduced, and it is also lower than 1% in the last stage of the disease. 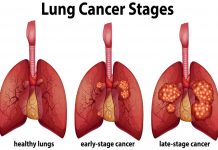 All You Want To Need About Lung Cancer