The core of the respiratory process is a pair of organs we can call the lungs. The lungs are made up of spongy tissue and located inside the rib cage and over the diaphragm. They constitute the main organs in the respiratory system and play a significant role in body waste management.

In this article, we’re briefly walking you through what you need to know about lung anatomy and physiology. After you’re done reading, you will understand how your lungs work. You will also become able to point to a section of the lungs and feel more comfortable when listening to your doctor talk about parts of the respiratory system.

1Important Data about The Lungs

Important data about the lungs

Like other organs in our anatomy, the lungs are found in pairs, but their size is not equal. The right-side lung is wide but shorter in length due to the liver’s presence on that side, right beneath but separated by the diaphragm. The left-sided lung is narrow due to the presence of the heart on that side. Despite the differences, our lungs can work in unison with stable and uniform movements that do not override each other.

The capacity to hold air is much higher for men than women. The lungs are air-filled organs of a pinkish-grey color. They are elastic, which is fundamental to stretch appropriately. The right lung’s weight is 600 grams, and the weight of the left lung is 550 grams approximately.

They are both the respiratory system’s main organs, and you can see them in anatomy drawings divided into different lobes or zones by oblique and horizontal fissures. The right-sided lung comprises three lobes known as the upper, middle, and lower lobes. In contrast, there are two lobes in the left-sided lung, known as upper and lower. Oblique fissures divide these lobes, and each one gets a different branch of the respiratory tube.

The lobes are composed of sponge-like tissue, and the lungs are then enclosed by a pleura membrane, which isolates them from the chest wall. The pleura is a double-layered membrane that covers the lungs, and between them there’s a liquid called pleural fluid.

Both lungs have their pleural sacs. Thus, when a lung is deformed, the other stretches further and continues functioning.

Anatomically, each lung adopts sort of a triangular shape, consisting of three borders and three surfaces with a base and apex. 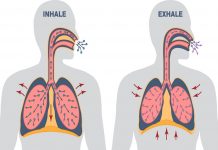 What Is The Function Of The Lungs? Exploring Lung Physiology